This is a Golang / HTML5 / vanilla JavaScript web-application which stores encrypted text files in three places: 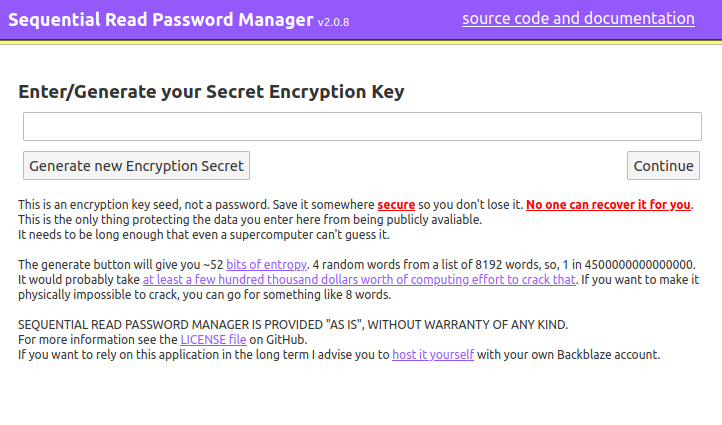 OR run it yourself in docker:

See "Hosting it yourself" for more information.

First and foremost, the application should be easy to audit since it has minimal dependencies:

You can re-produce the sjcl.js I am using like so:

You can compile the wasm & associated interface helper scripts yourself by running the wasm_build.sh script in the wasm_build folder.

So, there are only three build steps for the app, the sjcl Makefile, the WASM build script, and the golang build. No front-end build tools or npm packages required.

There is only one place in the code where XMLHttpRequest is created, and the request payload is encrypted in the same block of code. Same goes for localStorage.

It was designed that way to strengthen the claim that "everything it sends out from the javascript VM is AES encrypted with the key you chose".

In the past I had used the default symmetric encryption standard from the sjcl "convenience" package. However, for version 2 of the password manager, I replaced it with my own "generate a random initialization vector, encrypt, then HMAC" implementation. I had two reasons for doing this:

It uses the Service Worker API to ensure that even if my server goes down, the app still loads.

It also has its own Backblaze credential with access to the bucket, so you can still access your passwords from a new device if my server goes down.

It will also work even if your device has no internet connection, of course any changes will not be sent to the server or to Backblaze until you connect again and prompt the app to update the file again.

It uses a naive approach to keep all 3 data stores in sync: When writing, it will attempt to write to all 3 and tolerate failures. When reading, it will compare the lastUpdated timestamps on all versions that it received, and if they don't match or if one is missing, it will issue a PUT with the most up-to-date version.

That means if you happen to make conflicting changes, there is no real conflict resolution. The latest one wins.

You are allowed to use whatever seed you want for your AES key. If you pick a weak easy-to-guess seed and get hacked, that is your fault. The application warned you about it. It was even red, bold and underlined!

The application includes a timestamp + mouse-movement + SHA256 + window.crypto.getRandomValues() based entropy generator to create a secure passphrase with 52 bits of information, encoded in base 8192 as 4 english words. An example:

According to the cost analysis from the original scrypt paper this puts the monetary cost associated with brute-force cracking one of these keys in the millions of dollars. That paper is quite old now though, so I would adjust it down to hundreds of thousands of dollars to account for the advancement in scrypt ASIC / GPU chip production associated with Cryptocurrency mining. That said, I don't know if existing Litecoin ASICs could be retooled to crack these passwords. I doubt it, because the scrypt parameters I am using will demand a LOT more memory than Litecoin mining will. So probably those ASICs would not be able to complete any of these hashes.

Also, keep in mind that casual remote attackers probably won't even have access to the ciphertext anyway, since they would have to sweep your browser's localstorage or get it from Backblaze somehow. (They can't list the bucket without gaining access to my Backblaze account, and they can't know ahead of time what the filenames are without knowing your passphrase). I just put a scary disclaimer on the app since I don't want to be holding people's weakly encrypted password data.

If you are extremely paranoid and want to make sure that its physically impossible to brute force your password, just use 8 words or something. That will give you over 100 bits of entropy which should be more than enough.

This software is provided "AS-IS" under the MIT license. For more information see the LICENSE file.

When you are creating the backblaze bucket, make sure you enable "Files in bucket are public". 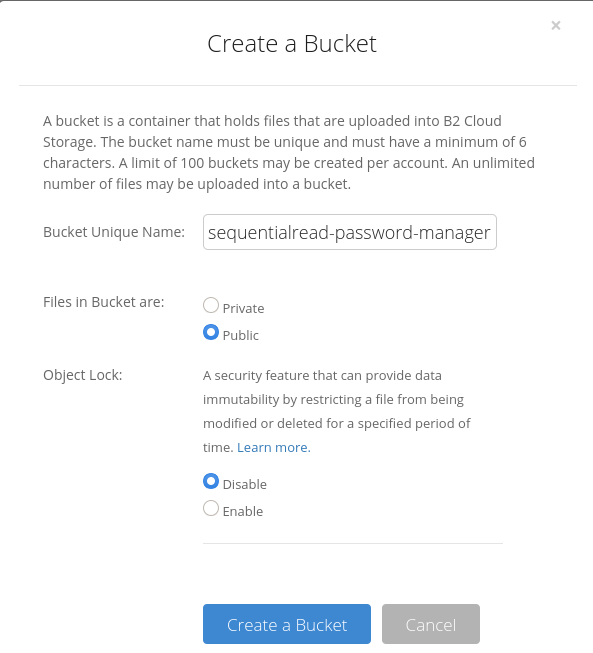 You will also have to enable CORS on the bucket. Enabling CORS in the UI will not work, you have to manually enable it on the bucket using the backblaze API.

You also have to create the backblaze application key using the API because the web interface wont let your manually select the specific capabilities for the key.

Creating the Backblaze application key which is limited to the bucket & can't list the files in the bucket:

My bucket's S3-compatible-API endpoint (displayed under the bucket in the backblaze web interface) was s3.us-west-000.backblazeb2.com.

When setting the environment variables, I set them like this: